After almost twenty years, the liner on our pool needed to be replaced. The puppies helped its demise along when they fell in and clawed their ways out of the pool.  David gave the pool to himself when he retired. He never golfed, fished, hunted, drove fancy cars or did much but work and come home so it was a well deserved gift to himself and he has used it a lot over the years and we have shared it with others and had pool parties.  But now the pool needed some much needed up keep.

It didn’t help the pool liner that when we got Lucy and Sugar, they both at one time or other fell in and in their efforts to get out, scratched holes in the side of the liner.  David patched it and it has held up well all Summer, but we really could not wait to get the new liner installed.  The pool company has been so busy and has had to wait for our liner to come in, but finally they received it and said they would come and get the job done.

It was an exciting day. 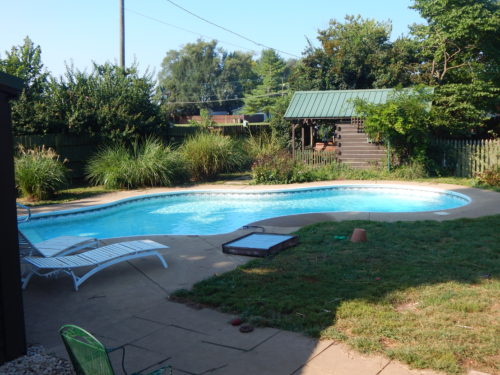 Here is the old pool. It still looks pretty good, but you don’t see all the tears in it. It was really getting rather worn in several places. 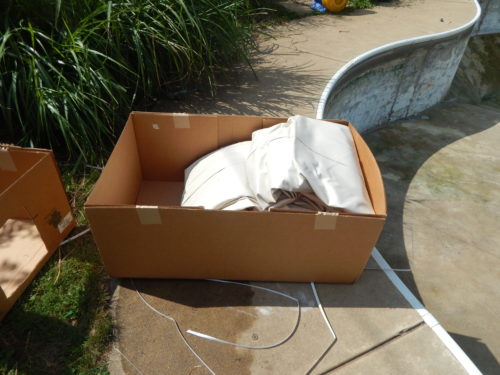 A whole pool liner in one little box. 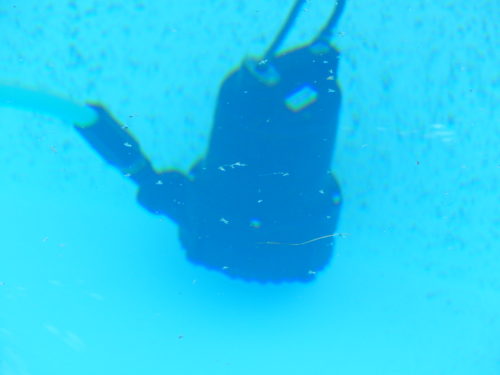 A pump was put in to pump the water out. It was attached to just a regular garden hose so it was going to take a while for all the water to be removed.

Put in the bottom of the deep end, it began to pump. It took three days to pump most of the water out! 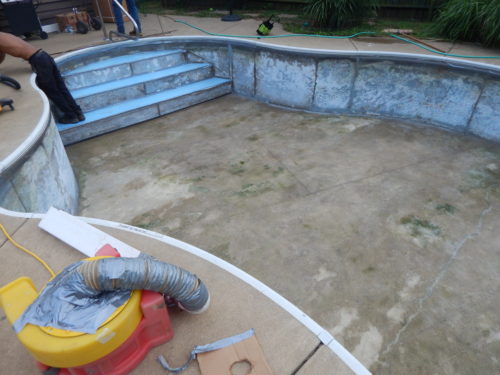 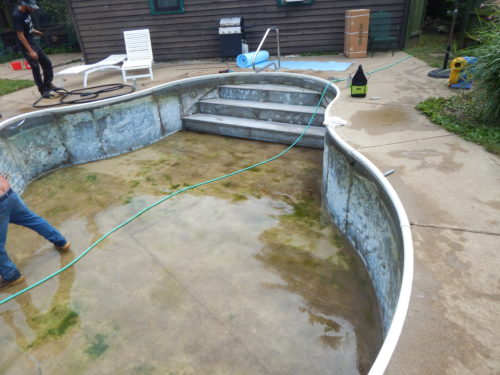 The pool looked so sad. 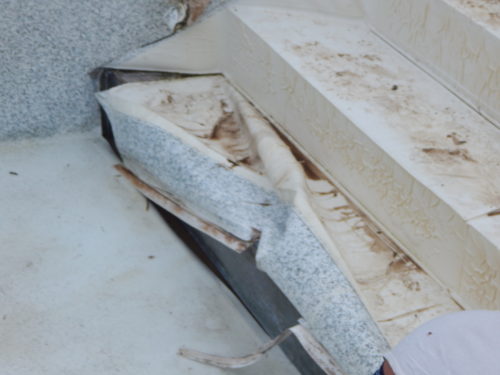 The liner had become brittle and came out in pieces. It’s a wonder we could swim this Summer, but we did.  And the liner held up well until the water was taken out. 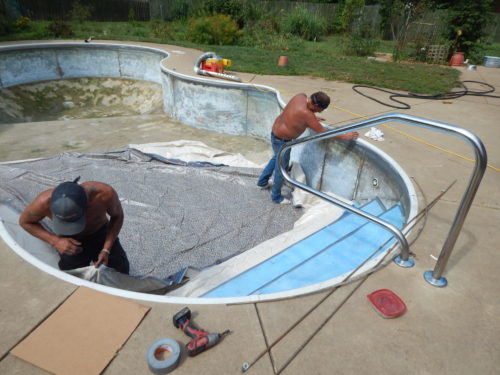 Out with the old, in with the new.

Two very tanned men put in the liner.  They work outdoors all the time. Thus the tans. See the young man in the hat? 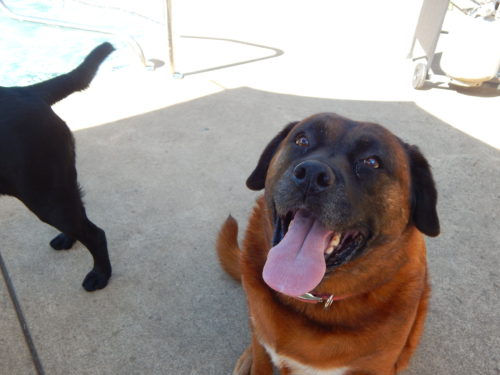 Well, Miss Molly, when she was let loose, ran right up to him, her little backside wagging so hard and she went up to him and laid on her back and just looked at him. I told David I think she was in love. I have never seen her be so friendly with anyone, including us.  David told me she followed that guy everywhere.  I’m sure he liked that! 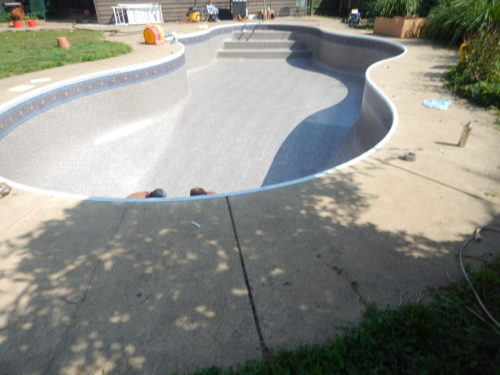 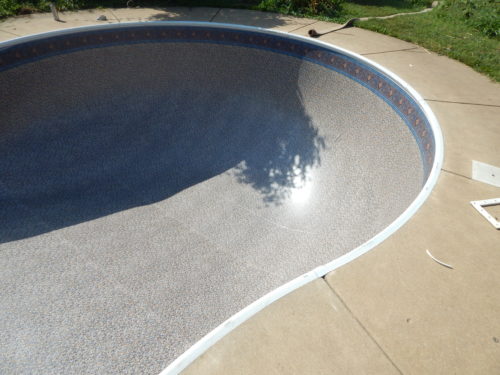 The liner in. Those guys knew what they were doing. 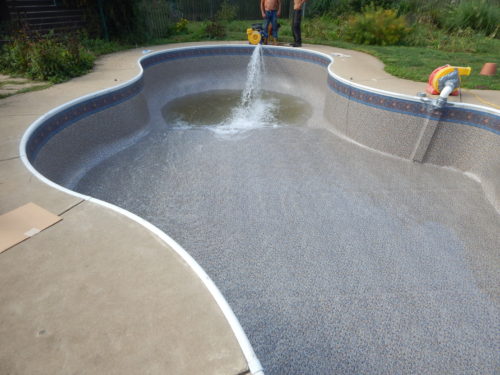 Time to fill the pool. The men attached a big hose to a fire hydrant that is in the back street back of our house. It didn’t take nearly as long to fill,  Just a few hours. 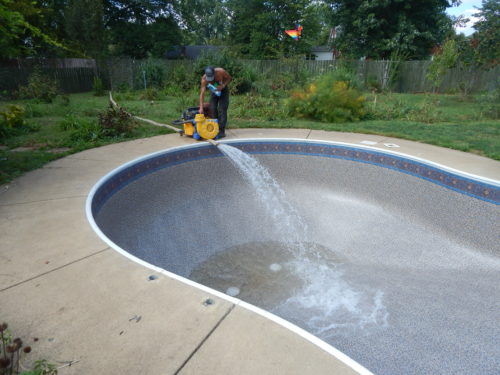 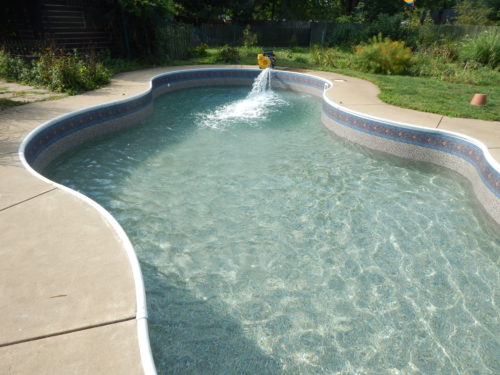 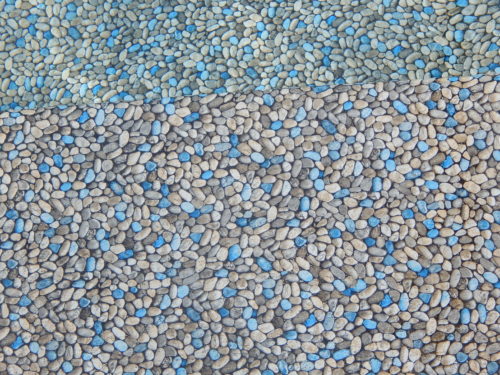 This is now what the bottom of our pool looks like. It goes so well with our house and surroundings.  Much better than the tropical look the old pool had.

I love how the water looks now. It’s so beautiful in the sunlight. 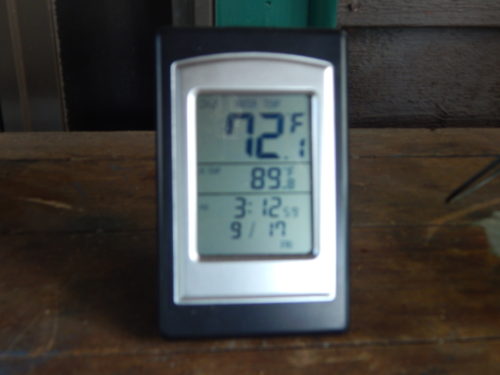 The water was cold. Way too cold for me to get in, but…… 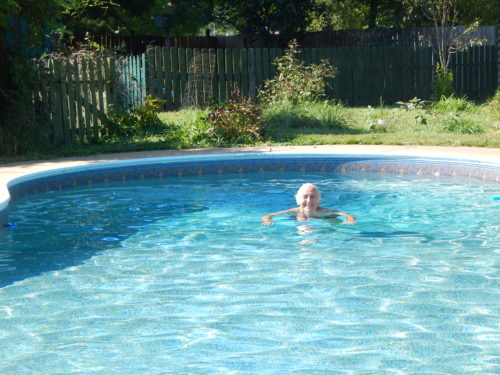 David couldn’t wait. I told him I’d join him next Summer when the water is about 85 degrees, 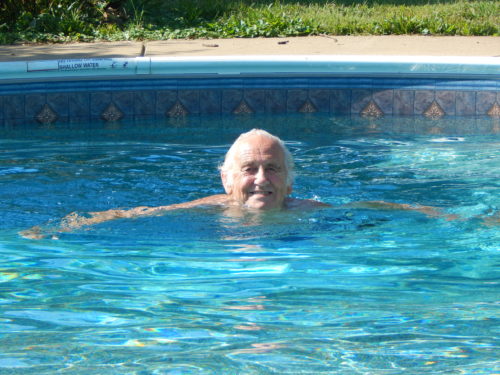 He is very happy with his “new” pool. 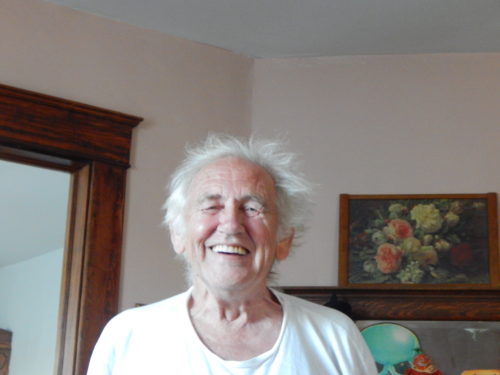 And this is his Albert Einstein look after being in the pool!   We both had a good laugh.

In other news, David has been working on a project. We have a lot of old fencing that he took down and now he’s making new fencing, but of the decorative kind.

Picket fencing to be exact.  We are going to put these around some of the flower beds. He made six of them for me and is making more. I painted them a pine forest green.

My new favorite meal. An Arby’s roast beef sandwich and a Jamocha shake. Yum.  We have two Arby’s in town and one of them makes the shake a little stronger than the other so I always want to get it from that one. 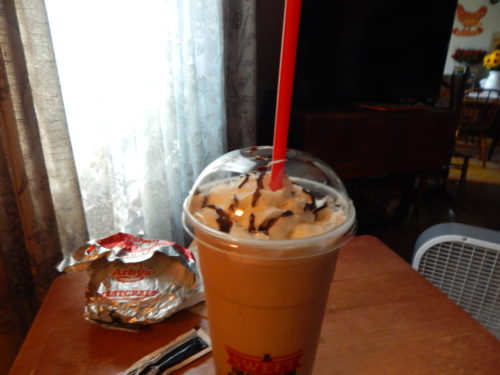 It’s really a meal in itself. 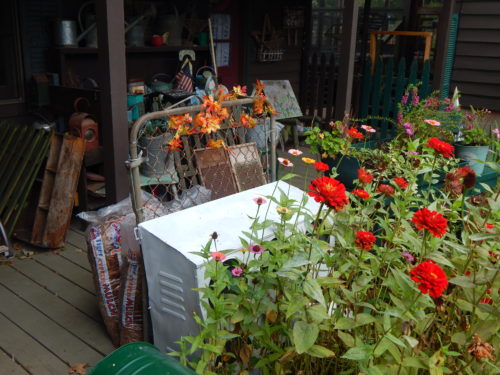 Just wanted to show you the old gate I bought on that country tour we took a few weeks ago.  There is an antique store in town that had one similar to this one for sale and they wanted over a hundred dollars for it!!!!  Just saying, I got this much, much cheaper.  It pays to shop around.  Aren’t the zinnias lovely?  They are beginning to fade now, but I am already planning my garden for next year.

Here’s to an almost new pool and the fun that will go with it. Bye.