David has been on vacation the last week and it’s been a busy one.  We celebrated our fifty-third wedding anniversary on the 7th with eating out and that is about all.  I was not feeling well for three days, nausea and just the blahs so I didn’t feel like eating much.  I’ve pretty much given up fried food because it always upsets my stomach so we went to Olive Garden for their  soup and salad lunch with breadsticks.  It was so good.  I felt like I kind of missed our anniversary in some way, but the week got better.

My granddaughter’s wedding was three days after our anniversary and as they were not having a wedding cake she asked me to make a few cakes, so I did. I made an orange chiffon cake, a chocolate cake and a magic pumpkin pie cake and I also baked seven dozen sugar cookies and iced them.  I was in the kitchen for two days making all this.  Other people brought desserts also so there was a table laden with them all.   There were so many desserts at the reception they were begging people to take pies home.

The wedding was in a church in Anderson about an hour away so we packed up Saturday morning and drove up. 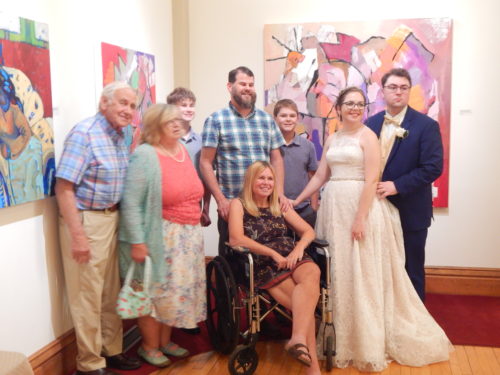 Pictures were taken. This David and I with the bride and groom and our daughter’s family. I look a little grim here. Don’t know why.  I so hate my picture taken. Always have. 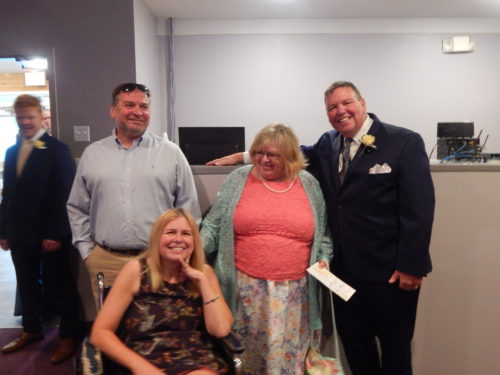 First time all three of our children have been together in years. 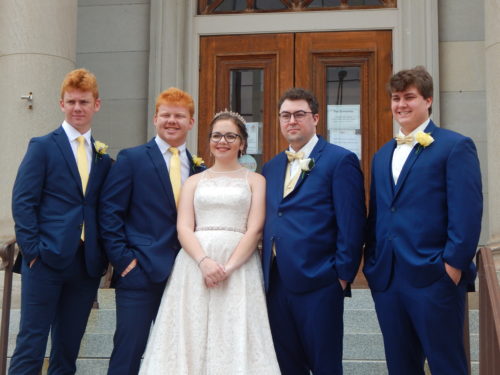 The bride with her red headed brothers and the groom with his brother.  His brother caught the garter at the reception and his girlfriend caught the corsage so maybe there’s another wedding in their future.

These ladies provided the music for the wedding.  I can’t remember the song the bride came in on, but the music the bride and groom left the church was from Star Wars!

The reception was held in a museum in Anderson.  It had beautiful architecture and there were interesting paintings on the walls.

This beautiful fireplace graced one room. 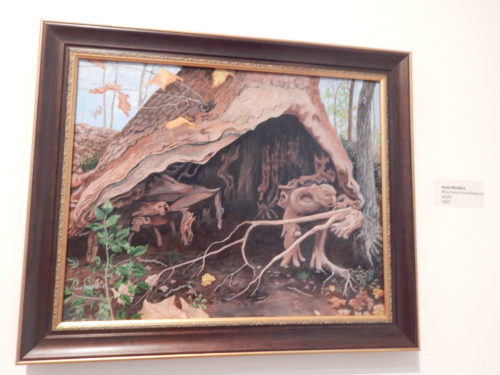 These were a couple of the paintings for sale. I really like the one with the chickens and for three hundred dollars I could have it.

After the meal there was dancing.   Everyone looked like they were having so much fun. 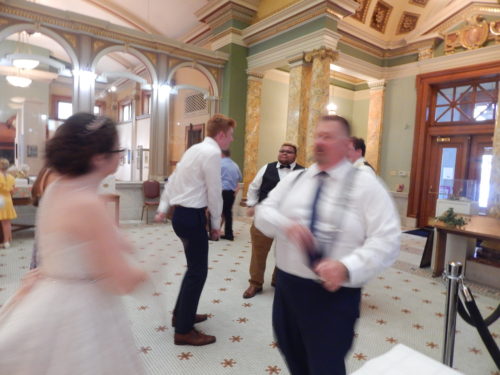 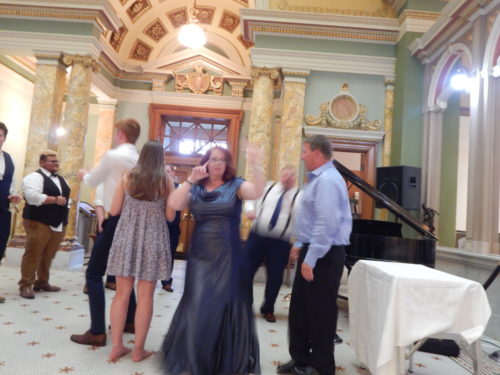 Mother of the bride. 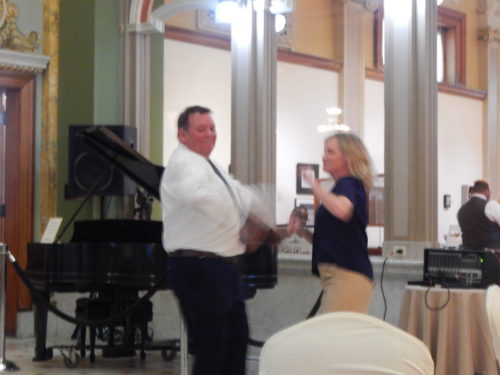 My son and his new wife. 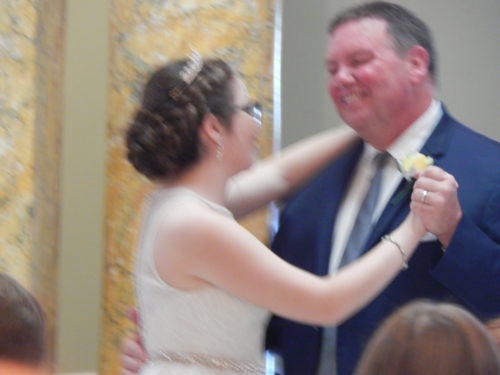 He danced with his daughter to the song, “Daddy’s Little Girl,” which brought some tears to my eyes.

Back to real life the day after and our pups had found a treasure while we were gone. 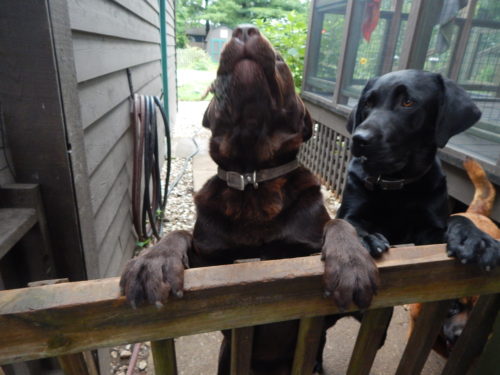 Both Lucy and Sugar were anxious to show us their treasure.

While we were gone they had dug up a huge mole in our yard. 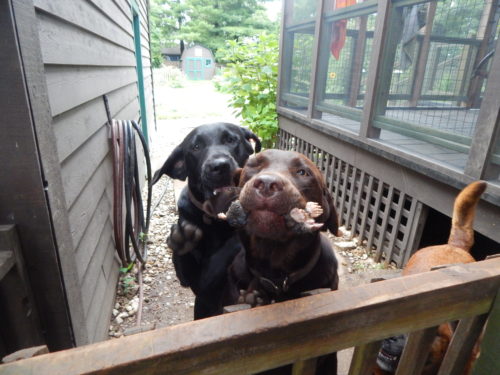 Lucy was running around with the mole in her mouth with its feet out one side of her mouth and its head out of the other.  Ugh. Thank you, Lucy, but you can keep it for yourself. Every time I went into the yard today she ran up to me trying to give it to me. 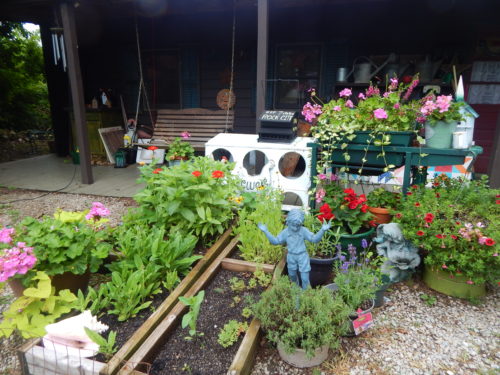 My little garden in front of my shop is blooming. 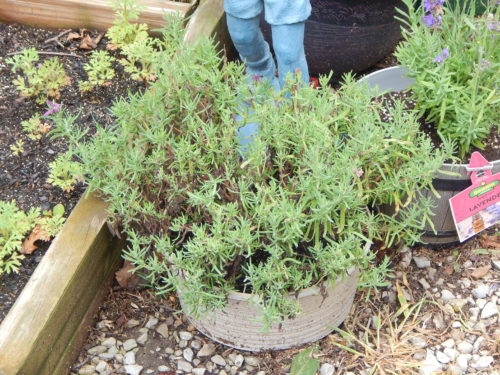 I trimmed the lavender and it is coming back again. 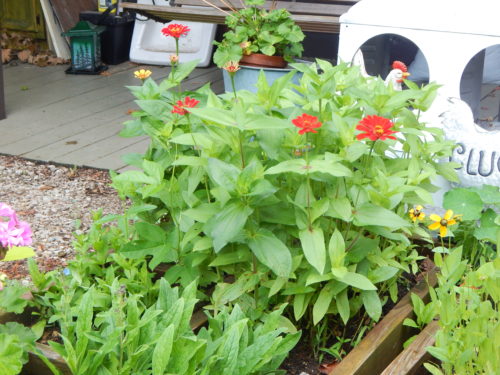 The zinnias are blooming.

These are blooming, but I don’t know what they are called. Ever plant something and then wonder what you planted?  Happens to me all the time.

I bring this Begonia in every year and every year it gets prettier and prettier. 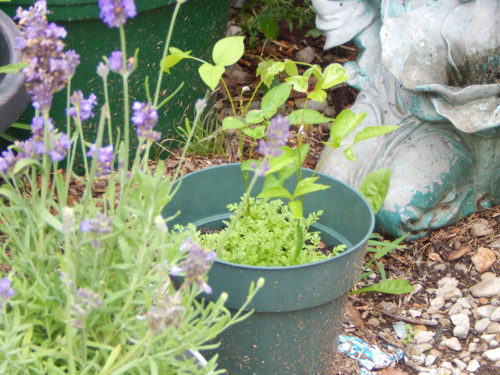 And some more flowers coming up that I’m not sure what they are.

David has another week off so we are going to try to celebrate our anniversary some more.  I know that Red Lobster is in our plans.  And Mexican.

Here’s to anniversaries and weddings.  May they always be celebrated. Bye.