If the days go much faster, I may as well stay in bed because night comes so fast and I wonder what I got done and where did the day go?    It’s crazy.  We have been busy the past few weeks and every time I think I will write a blog post, something else takes my attention and another day is gone.  With grandson’s ball games and our granddaughter’s wedding shower we don’t lack for places to go.

Got to see one of this young man’s ball games.  The ball park was out in the boondocks. We drove and drove back roads and finally found it, then discovered there was a shorter way to it, but the drive was nice.  His team lost, but he did strike out all the batters in the inning he pitched except one who hit a homerun.   I love watching baseball because I understand it and I use to play it when I was a girl.  I was on a girls’ softball team one Summer and we traveled around to different towns and played.  It was so much fun and it was a great bunch of girls on the team.   I think we were pretty good if I remember right. 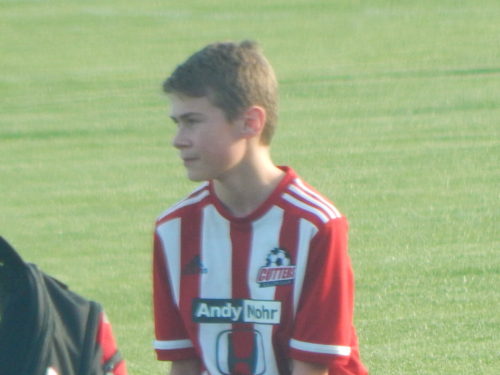 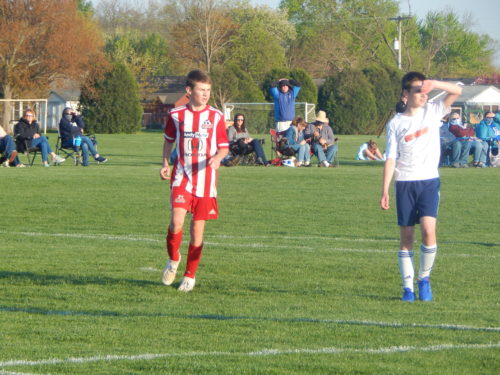 And we got to see this young man play soccer.  I understand soccer pretty well, but because we were sitting so far away, it was hard to tell who was who.  His team won their game.  Just wish the boys lived nearer so we could go to more games because I really love seeing them play.

One of my projects this Spring was to clean off my shop porch and make a small raised bed garden in front of it.  My porch had become the catch all for everything from garden supplies to David’s tools, to just junk so I want it all gone.

We took some steps from our old back deck to make the raised beds. Turned the steps upside down and there we had a raised bed. 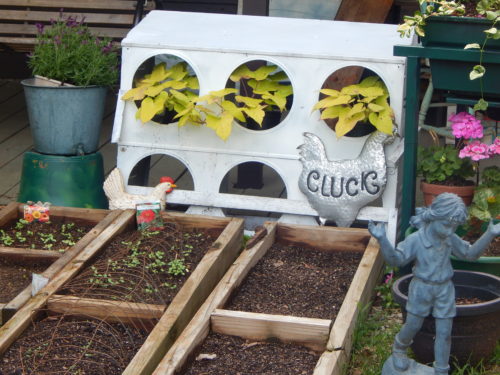 An old chicken laying stand is used for a backdrop and to display a few flowers. I found the white chicken at an antique store a couple of weeks ago and I bought the metal chicken at Rural King last year. The little girl statue is named Sara after our daughter.

Since this picture was taken the leaf lettuce is almost ready to pick.  I love wilted lettuce made by cooking chopped onion and bacon together, stirring in some vinegar and brown sugar and pouring it over leaf lettuce. Yum.  Don’t have the measurements I use, just trial and error. 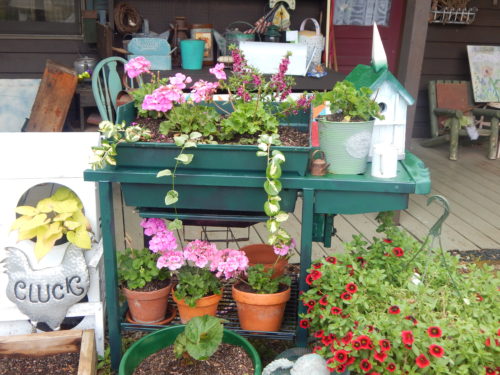 We have had this old grill sitting back by the dog pen for the last few years and every year I told David I wanted to do something with it, so this year I did.   Cleaned it up, sprayed it with spray paint and it makes a wonderful place to plant flowers and display them.   I’m really pleased with it, if I do say so myself. 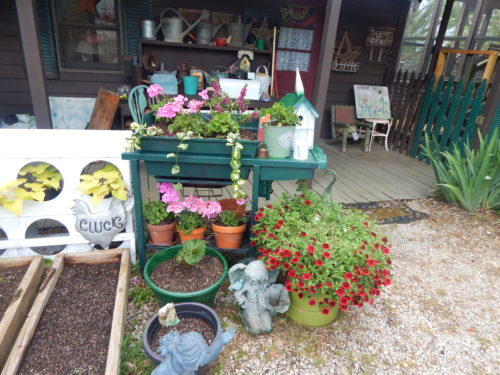 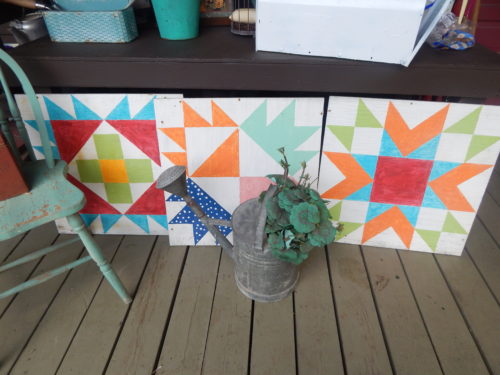 Used some barn quilts I painted a few years back to hide the mess under the porch table. 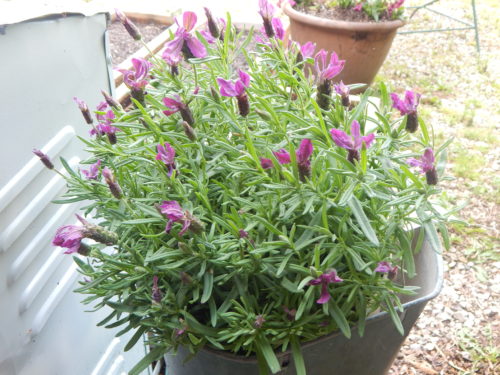 Put this lavender in a maple syrup bucket.

I have lots of room in front of my shop to plant a lot more if I want to. Since it’s hazardous to anything I plant in the back yard with the puppies still chewing on everything, I am using what I can to plant what I can. Just this week they tore out an azalea I had just transplanted while digging for a mole, so I put the azalea in my kitchen garden which is fenced in.  I will have to show you that garden another time. I have been pulling wheel barrows full of weeds out of it. I haven’t been able to weed in there for the past few years and the Creeping Charley took over. Now Creeping Charlie is kind of pretty in its own way, but it tends to take over a flower bed and a lawn.  It just about kills me to weed now, but I’m determined to get that garden back in shape. I have discovered several Hibiscus that were overtaken with the weed, but now they have sunshine and just in the past couple of days they have grown taller. I also pulled out poison ivy and dug up a little tree that had taken up residence.

A few years back I planted some wildflower seeds from Wildflower Seeds Farm out of Fredericksburg, Texas.  We visited there a few years ago and it was amazing.  Anyway, the only flowers that keep coming back from that planting are these Dame’s Rocket.  And they have spread.  I’ve got potatoes planted in that old wash tub that doesn’t have a bottom.

Dame’s Rocket is so pretty. It crossed the drive and planted itself right by our walk up to our  front porch. We had to mow some down because it was taking over, but I love it. 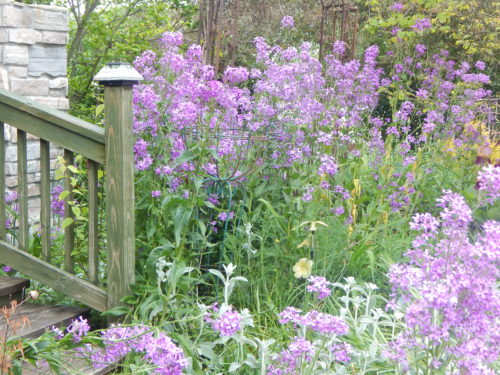 Here it is by the front porch steps. I really wouldn’t care if it spread all over the yard. It seems to bloom forever and it’s self-seeding which are wonderful traits for a flower. 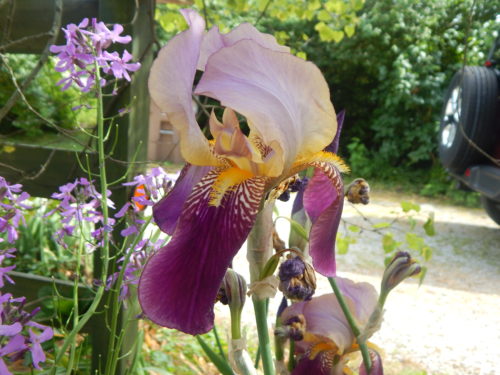 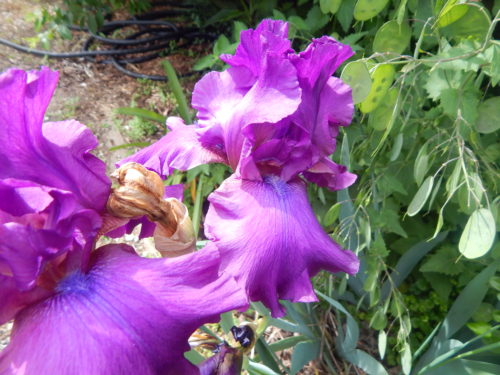 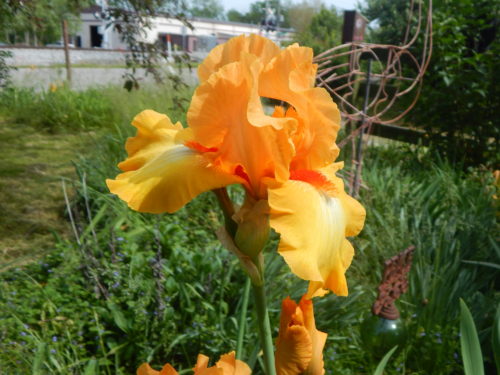 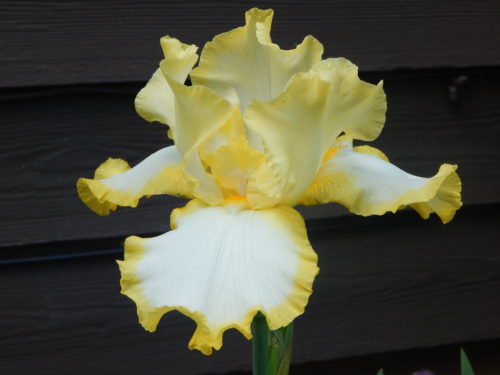 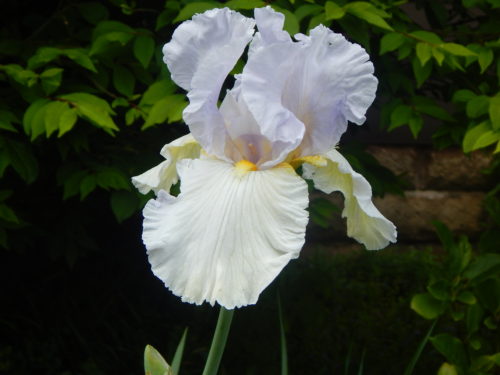 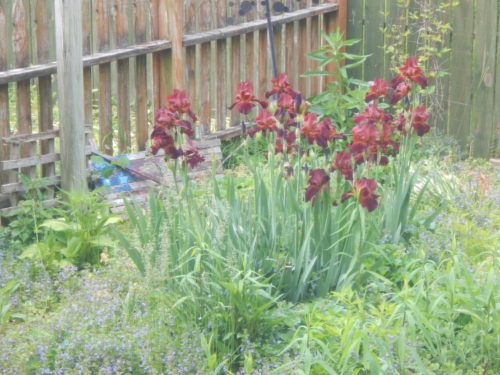 Just a few of the Iris I have in my gardens.  One day a complete stranger stopped and asked me if he could have a start of that bright orange Iris. I told him sure if he had anything he could trade me for it.  So a few days later that man brought me a small lilac bush and this year those lilacs were so beautiful and smelled heavenly and we already have transplanted another lilac bush from it and there is another sprout we are going to transplant.  So it’s fun to trade plants with people. I hope my flowers are doing as well for that man. And those orange Irises have spread to different parts of the garden and I haven’t touched them! 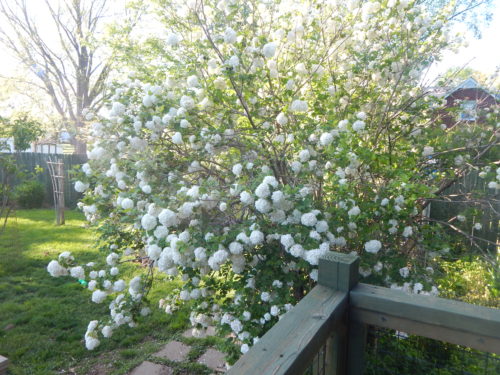 The snowball bush I thought had died last year put on quite a show although the flowers were smaller than usual.

And the small bush that we transplanted from the older bush really did well this year.  We got the original plant from David’s grandmother’s yard years and years ago. 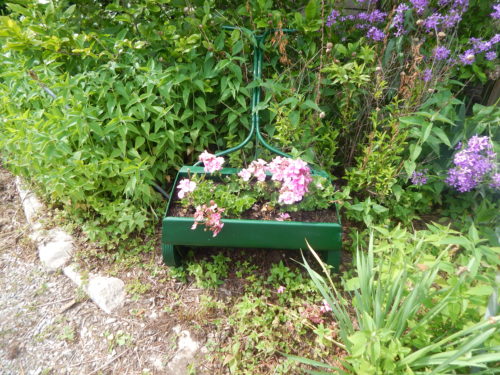 You can make a planter out of anything. This is an old fertilizer spreader that’s seen better days.  Just a paint job and David put a board inside to hold the dirt and voila!  Flowers in bloom. 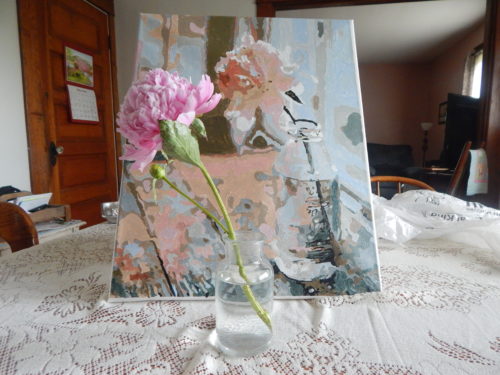 The peonies were absolutely gorgeous this year. My favorite flower. And here is art imitating life. I painted the picture last Winter and tried to imitate it with my own bottle and flower. 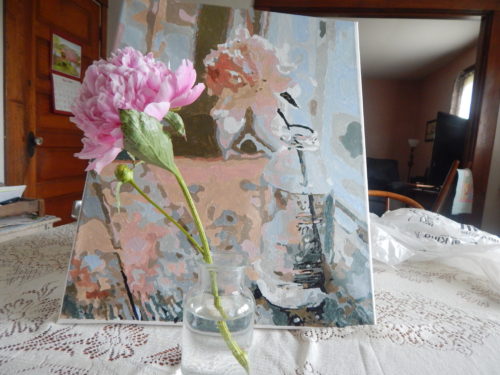 Funny what I can get up to with time on my hands! 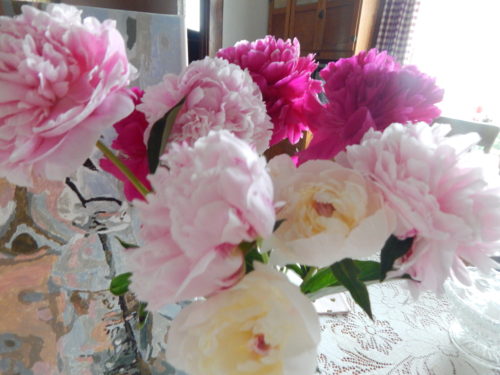 Who doesn’t like peonies? If you don’t, I’m not sure about you!   They are so beautiful and many smell so good. Their only problem is they don’t last long enough in the Spring.  I’ve ordered nine more of them for planting this Fall. 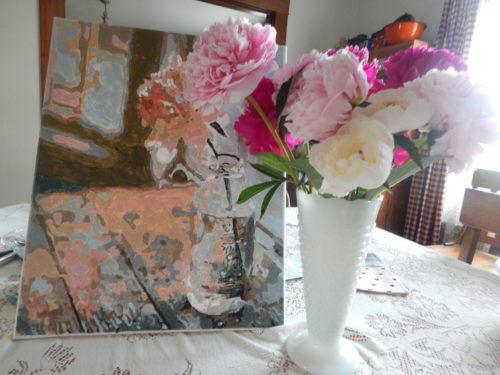 If I were getting married again I would want a huge bouquet of peonies to carry down the aisle. 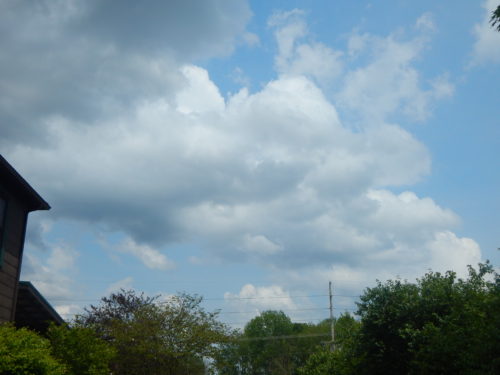 I love Spring skies. Pastels just like in the garden. Finally warmed up enough that I wasn’t chilled for a few days and then it got cold again and now it’s back to normal.

I have much more to write about, but I will end with two of the best things that have happened in the past month. My oldest son and his girlfriend finally decided to get married.  They have been together for eleven years and her son is like a son to my son(got that?)  So one day they just decided to get married without a ring or anything.  They bought a house together. 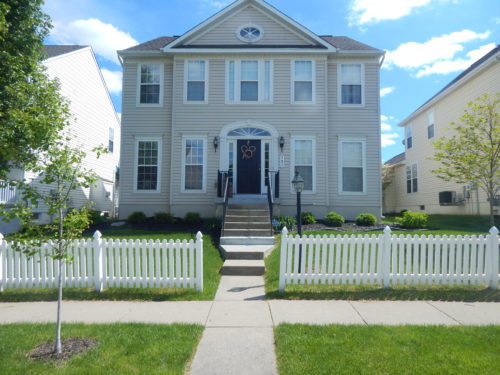 It’s in a beautiful division with houses that look old from the outside.  It’s very pretty on the inside also. 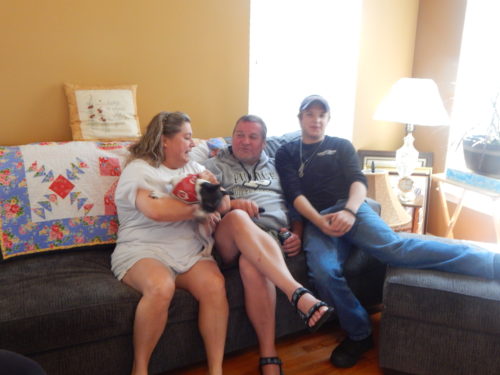 This is the happy couple and their son and dog, Annie who is so cute.

I think they all like each other and I officially have six grandchildren now.  The more, the merrier.

And speaking of weddings. Our oldest granddaughter is getting married in July just three days after our 53rd wedding anniversary.  A shower was held for her last Saturday. 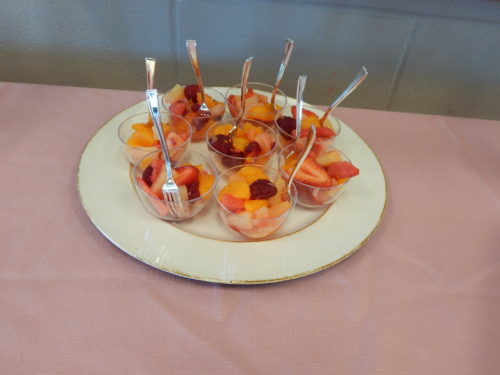 There was lots of yummy food although this is the only thing I got a picture of. 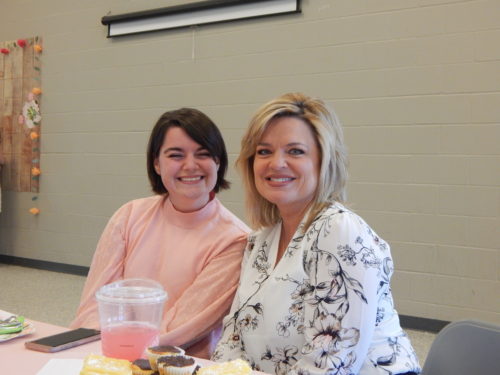 This girl is not my granddaughter, but I’ve known her since she was a wee baby. She and her mother and I made quilts for the babies at Riley’s Children’s hospital. When she was first born she spent her first few weeks there because she was premature, but here she is now. The quilts were her senior project by the way and now she’s already graduated from college and is teaching English. 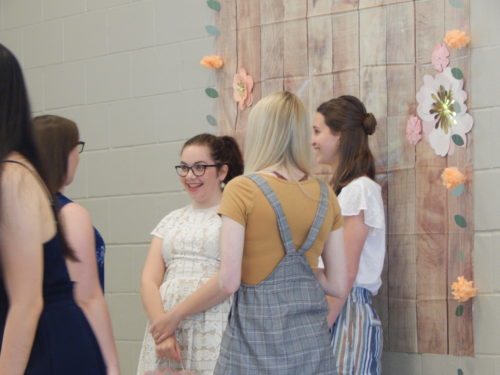 My granddaughter in glasses. She graduated from Purdue University in three years with honors, already has a job this Summer at the Children’s museum and she and her future husband have already bought a house.  She got straight A’s, by the way, but I’m not at all proud of her!!! 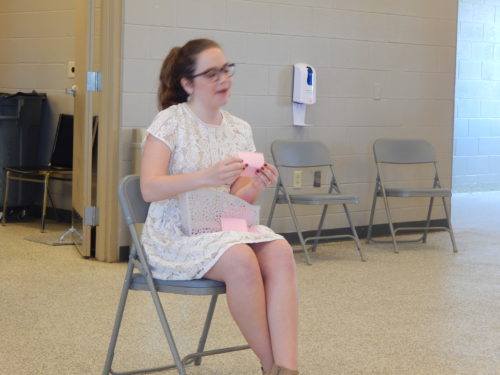 We all wrote questions for her to answer and also we wrote down when we first met her and she had to guess who wrote each note.  It was easy for her to guess mine as I’ve known her since she was born. 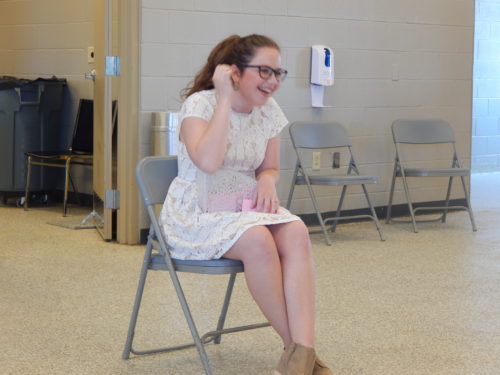 There were lots of laughs and some tears, but a good time was had by all.

I will end right here which is a good way to end. Bye.